What is Tribal Leadership? An Executive Summary 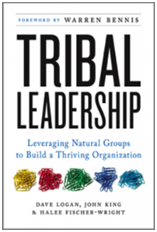 How do leaders change their corporate culture? Like the old joke about eating an elephant, the answer is one bite at a time. The book, Tribal Leadership: Leveraging Natural Groups to Build a Thriving Organization, is the result of a 10 year study of over 24,000 people. Authors Dave Logan, John King, and Halee Fischer-Wright guide leaders how to recognize their culture and what steps they can take to nudge their culture to higher performance, bit by bit.

Twenty plus years ago, the authors recognized “strategies failed 70 percent of the time.” (p 211) In their inquiry to why this occurred, they discovered Peter Duckers’ statement that “culture eats strategy for breakfast” was true.

Their research affirmed that just as birds flock and fish school, people tribe. A tribe is a naturally forming group of between 20-150 people. If you are a small company, this can be a single tribe. For large organizations, there can be many tribes. They can be departments or cross over. For example, it is easy to spot the culture difference between sales and engineering. Tribes operate at different cultural stages, which can positively or negatively impact your results as an organization. A high performing tribe can be eight to ten times more productive.

Author Edgar H. Schein, MIT’s sage of organizational culture, says changing a culture is about, “observation, inquiry, and leverage. This means observing the ways in which an organization’s employees act; deducing (or inquiring about) the ways they think; and putting in place small behavioral changes that lead them, bit by bit, to think about things differently.” (Strategy + Business, Feb 2011)

What the book Tribal Leadership does, is map, for the first time, five stages of corporate culture and the unique leverage points to nudge a group forward. The authors grouped the stages based on the language used and the structure of the relationships. The five cultures are:

Stage One: Criminal clusters, such as gangs and prisons, where the language is “life sucks,” and people act out in despairingly hostile ways. Life is so unfair for this segment that anything is permissible. Fortunately, we don’t have to deal with this much in the work place. It is only 2 percent of the total population, while 40 percent in prisons.

Stage Two: The language used here is “my life sucks.” This group makes up 25 percent of workplace tribes and exhibits the behavior of apathetic victims. This is an upgrade from Stage One because even though their life sucks, they see others around them whose life is working. They may have conversations of, “if only I had a college degree,” or “if only I could afford a car,” then my life would work. If you think of the TV show, The Office, this is the culture of the staff. They do the minimum amount of work to get by and don’t show initiative.

Stage Three: This is dominant culture in almost half of U.S. workplace tribes, where the language is “I’m great” and they are thinking, “and you’re not.” In The Office, this is the character played by Steve Carrell. Stage Three people are competitive and work to show everyone that they are smarter and better than anyone else. This personally competitive cultural stage produces limited innovation and almost no collaboration.

Stage Four: Representing 22 percent of tribal cultures, where the language is “we’re great.” Stage four is the zone of Tribal Leadership where productivity improves substantially, three to ten times more than at Stage Three. Teams are the norm and genuine stable partnership is the structure. At this stage, people feel more alive and have more fun. Zappos is a company at Stage Four.

Stage Five: This is the culture of 2 percent of workforce tribes and the language is “life is great.” Here, people focus on realizing potential by making history. Teams at Stage Five have produced remarkable innovations, leading their industries and the economy.

Once Tribal Leaders identify which cultures exist in their tribe, they can use specific leverage points to upgrade the culture. But first, they have to move themselves to Stage Four by shifting the way that they work and the structure of the relationships around them. It can’t work from a “do as I say, not as I do” behavior. Tribal Leaders have to “walk the talk” and authentically act differently. Specifically, at Stage Four leaders know and act from their “core values.” A core value is “a principle without which life wouldn’t be worth living.”

As a Tribal Leader, you can change the culture of your organization bit by bit – and make it run faster, better and more effectively. The result you will achieve will be greater strategic success, less stress and more fun!

If you are a Manhattan based CEO or C-Level Executive and you would like to see Dave Logan live in NYC, please let me know.